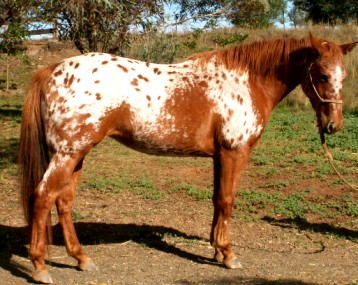 John and Julie Noble of Shepparton Victoria fell in love with this special mare earlier in the year when they made the trip north to buy their colt Cayuse Quoll.Well I weakened and now they are the proud owners!Knicknamed 'Auntie' due to the relationship to our sporthorse sire Cayuse A Grand Illusion ,she is also a full brother to the talented jumping horse Cayuse Rain King ,also of Victoria(a lot of the good horses seem to be in that state!)She was my personal riding mount the last two years for mustering and fun trail rides.so will miss her around the place.We are all excited to see her first foal due october though to the talented Cayuse Chatta Lena,should be special and we look forward to photos! 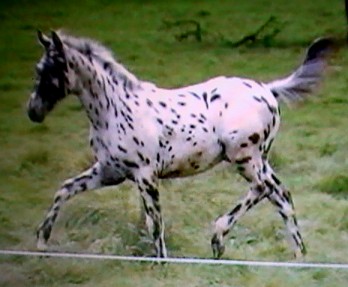 A spectacular black leopard Knabstrupper colt is on his way from Germany to Australia the end of June.The Knabstrupper is a spotted Danish warmblood reknown for their extravagent movement and high jumping ability.They have a wonderful temperament and a natural willingness to please the rider plus they come in some sensational exterior colours.Loris Flashpoint Af Lyn is a yearling(sorry only rough photos at present) sired by one of the best producing stallions in the breed Figaro Af Hallundbaek(see the sportaloosa website news for a picture of Flashpoints half brother Sheik).His dam is a top studbook mare by the gold medal winner Conetti Lynghoj.Conetti's progeny are powerful movers and tremendous jumpers.Apollon who is one of the most famous sires is also close on the dams side.So this colt combines three of the very best bloodlines and we hope he will do as well in dressage and jumping plus siring some colourful foals.He was awarded 8,champion premium foal at the gradings. 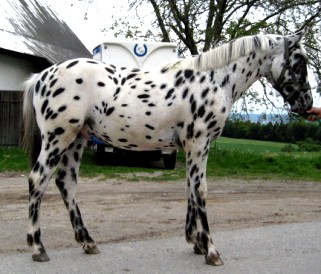 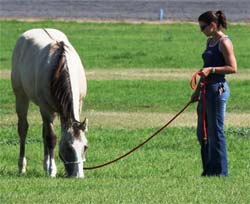 Melanie Torr made the trip up from Bendigo,Victoria and chose to take home the uniquely coloured silver dun,frosted rumped filly Isobel Anne.This classy yearling Mighty Storm Song(USA)daughter will take in some shows and then be trained for reining and enjoy the scenic trail rides near their home.

The young studbook one Sportaloosa filly Cayuse Sign Of A Storm won her first dressage test at the Namoi Horse Assoc.Official dressage championships 29th.March.She scored 59% to win the Prep 2 test and 60% in the Prelim 1.1for a fifth place.Well done ,she is a full sister to th very successful stallion Cayuse Mighty Outrageous.She was piloted by owner Samantha Mcauliffe. 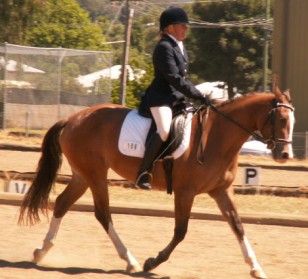 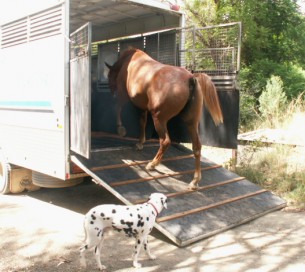 FIRST STEP ON A LONG TRIP!

Cayuse Few In The Cru (the full sister to our beloved stallion Cayuse A Grand Illusion)is off on her long trip to the lush green pastures of Sparkling Acres Appaloosa stud New Zealand.This great producing mare is in foal to the exciting new warmblood import Riverside(owned by Revelwood stud),so hopfully the Davidson family will have a super sportaloosa foal in September to add to their high class herd of spotted horses.

THE SKY'S THE LIMIT!

A happy pair looking forward to many adventures together.Skye Symons,Tamworth NSW, has just taken over the reins of the golden buckskin sportaloosa gelding Cayuse Oomagun(this name comes from an aboriginal character in one of Ion Idriess's books!).This talented gelding is in very good hands as Skye is also a dedicated nurse specialising in intensive care.Hope to see them at the team penning and campdrafts soon. 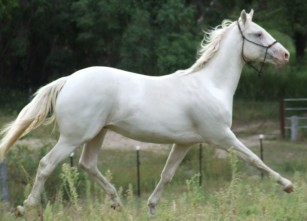 A uniquely bred sportaloosa colt left for his new home today.Blizzard -O-Lena found a great horsemans home in Tamworth.Jason and Natalie Wilkinson fell in love with this silvery white colt when they first laid eyes on him.He is uniquely bred being one of the very last colts by the cutting legend Ric-O-Lena from the super bred mare that combines bloodlines of Skips Supreme(usa imp/exp),Mighty Storm Song(usa) and TacoTaco(usa).We look forward to see great results under saddle and in the breeding pen.Keep this lovely colt in mind if you want to breed a colourful,talented sportaloosa,we are!
Natalie took this picture of Ice(his new stable name)enjoying his new paddocks. 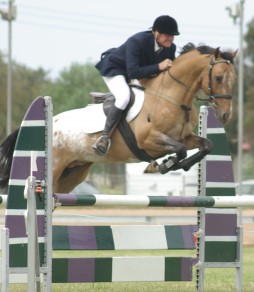 T'S COOL TO RIDE A CAYUSE!!Once again we offer you some fantastic sportaloosas.Some bred especially for reining ,cutting.campdraft and challenge events.Some bred especially for dressage ,jumping and eventing,show types,or just super trail or mustering horses for all the family to love and care for..All are bred for kind trainable temperaments,smooth riding qualities,classy exteriors and sound strong feet and legs..We have some lovely weanlings that are sold with full handling to tie up ,lead and load plus worming and tetnus vaccinations included in price.A few classy ridden horses and exciting proven broodmares.We especially welcome your personal visit through June and July so we can spend time showing you these lovely horses(up to 40),talk spots and enjoy a cup of coffee together.Let me know your requirements and I can suggest your most suitable new friend.All our horses are reared and live in large pastures on natural feeds with no additives or drugs to ruin them,all handled the quiet sensible 'Cayuse'way. 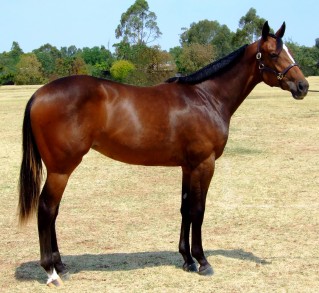 Debra Bawden of Cinco Park Appaloosas had a very successful first show with her eyecatching yearling filly CA Inconclusion at the Victorian State Appaloosa show,late Febuary.Inconclusion is from Cayuse A Grand Illusions second foal crop,her dam being the beautiful Thoroughbred mare Bi-Centenary.This gorgeous sportaloosa won the led galloway hack against older horses and placed fourth in the hunter in hand from 14 entries.Truly this lovely filly has a bright future in the showring.Check out www.cincoparkappaloosas.com for a top sportaloosa breeding programme. 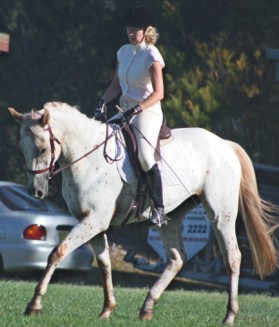 Rebecca Mcdonald from Sydney has just aquired the eyecatching sportaloosa gelding Cayuse Global Warrior(knicknamed Earl).This exceptional leopard gelding was sired by the German Hannoverian of the year Earl a direct son of the tremendous jumping sire Escudo1.His dam is Cayuse Twenty Below(saddly passed away last year),half sister to the great sire Cayuse Fewsion.So good things are expected!Already after only 4 months under saddle the dynamic duo scored 63% at their first dressage competition.We will keep you posted about future happenings. 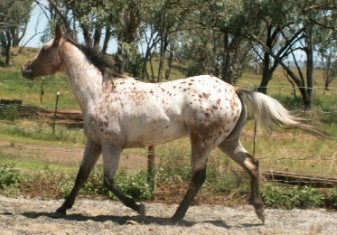 GOOD FILLY TO A GOOD HOME!

Congratulations to Lisa ,Sandy and Andrew Bell of Timboon Victoria on taking home one of the last Ric-O-Lena fillies .Lisa ,a keen cutting enthusiast chose this super bred filly(dam by the tremendous Lethal Lena(usa), to train and later breed for some of the Sportaloosa incentives at the NCHA futurity.She has a great appaloosa colt by Dual Jazz(usa)so if you are looking for a great one give her a call on 0355983257. 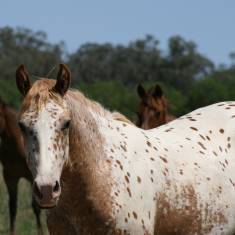 Lewiville Appaloosa stud run by Warren and Ann Lewis of Woodend,Victoria have just taken over the reins of the lovely leopard filly Cayuse Likable Lena by leading cutting sire Ric-O-Lena from the multi National champion Cayuse Mighty Irresistible.If you are in the area Lewiville stud is well worth a visit to see some great performance bred appaloosas.Check their web site www.lewivilleappaloosas.com They stand the brilliant leopard National champion reining horse Cayuse Confewsion.

The rare spotted warmblood breed of Denmark known as the Knabstrupper has finally found its way to Australia.The first shipment of frozen semen from the purebred performance tested stallion Xhogun Middlesom arrived in November.This talented bay whiteborn homozygous stallion has his home at the famous Blacklaw stud in Scotland.Stud principles Jon and Annabel Firmin are breeding very successful spotted sporthorses for eventing,dressage and jumping.He has been crossed to selected Cayuse sportaloosa and warmblood mares to hopefully breed some exciting future spotted performance stars.A couple of these mares may be for sale to good performance homes.Enquiries welcome. 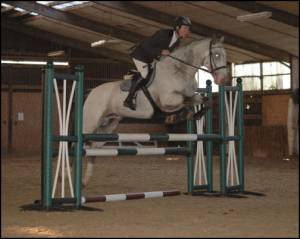 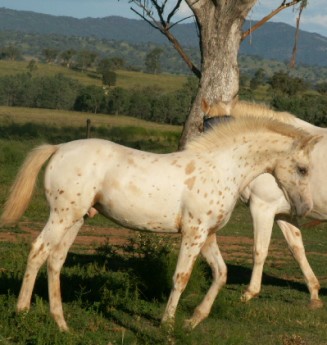 Yes,John Noble of Managlore Victoria,has taken home a very special colt.Sired by one of the most sensational cutting stallions ever imported Rackateer Cat from the super producing National Champion mare Cayuse Few Moon,this gold leopard colt has the genetics to produce some very special foals.Anyone that would like to breed a good using horse with colour,combining a smart teachable temperament with balanced conformation and strong sound limbs needs to check this boy out.Will update with grown up pictures soon. 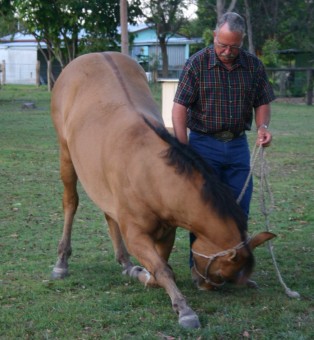 Congratulations to Mel Smith of Bundaberg Qld.on winning not only the High Point Performance Horse of Queensland and Northern Territory with Cayuse Red N'Reckless but also the High Point Amateur Rider award.Well Done.This flashy red dun gelding was also the runner up High Point Halter horse too.Mel is a talented trainer and has taught his buddy Red a variety of tricks too.Over on the west coast Di McNally won the Hi Point mare 4 years and over with Cayuse Slide Me A Few(also sired by Cayuse Fewsion),she also received the trophy for novice showmanship.At the Perth annual Versatility show Ricky Moss led Cayuse Jesse McMighty to supreme appaloosa exhibit and also won the eastern states bred award.Keep up the good work in'09!

Or we like our horses to be elevated!Heather Lee from Qld.took this fantastic shot when visiting Club Cayuse mares.Heather is down competing on her champion reiner Savannah Storm by Mighty Storm Song at the National Reining show,Tamworth.The show off in the picture is Dun To Perfection a full sister to Cayuse Jackson. 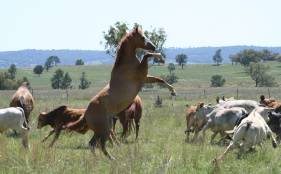 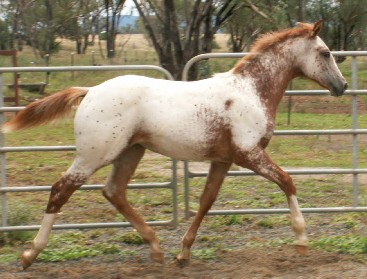 Natasha Attard was thrilled when her sister Nicole bought her the spectacular Sportaloosa filly Cayuse Dee Ninety Three.This intelligent daughter of Cayuse A Grand Illusion will be set for a future in the dressage field.All the best.

At the recent Pacific Coast Reining Spectacular,Gatton Qld,Heather Lee left some long slides to win the Non Pro trophy buckle with a good score of 70.Heather rides and trains her talented Mighty Storm Song mare Savannah Storm and is a very keen competitor on the southern Qld.reining circuit.Savannah Storms dam is being bred to Cayuse Fewsion this season for a future sportaloosa reiner. 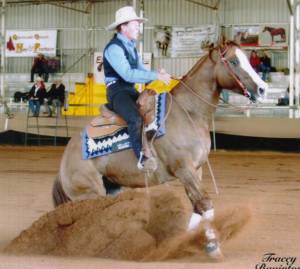 A couple of pretty leopard boys for you to check out at Club Cayuse.
Don't be shy, come see them.and more! 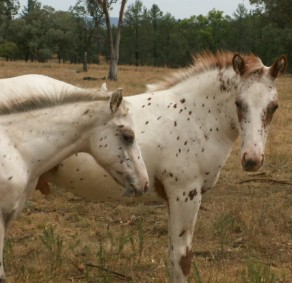 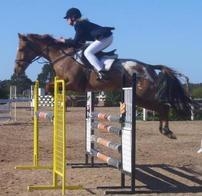 EFA Spring Showjumping Werribee Park 13 September.
Elisa Whitaker competed in her second only C/D Grade riding her bold gelding Cayuse Rain King.The pair completed a fantastic fast clear round,the gelding displaying his fabulous jumping ability to win secomd from a field of 130.At the Royal Geelong Show they competed C/D grade to win the Howard Perpetual Trophy for Champion showjumper.It was a particularly special honour for Elise placing in the Ryan McCubbin Memorial event as Elise's boyfriend Ben is Ryans brother.Ryan was tragically killed in an accident in 2007 aged 21.He was a top showjumper and the D Grade event was dedicated to him.
Cayuse RainKings full sister,Rain Princess,after a years hard work herding cattle has been bred to the emerging cow horse supreme Cayuse Chatta Lena.Should be a very special foal. 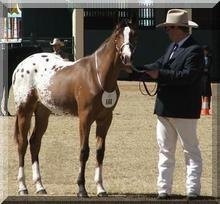 The first Sportaloosa colt sired by Cayuse A Grand Illusion has been
seen showing successfully at some of Qld.'s shows.This spectacular colt is pictured here at Brisbane Royal.His proud owners are Grant and Rachael Jacobsen of Chinchilla Qld.who are keen breeders of the spotted horses for the English disiplines. 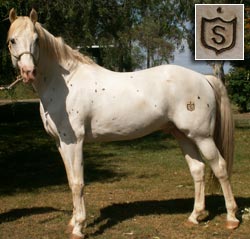 The stallion Cayuse A Grand Illusion is now proudly wearing the Sportaloosa International's official brand.This new registry for spotted athletes has been launched.Check by their website www.sportaloosa.com for updates,you will be pleasently suprised at the enthusiasm and promotion of this new breed of spotted sporthorses.We hope Illusion does the Sportaloosa breed proud in his future competitions.

Shellina Walther teamed up with the pretty mare Cayuse No Oak to win second overall in the silver buckle series.This young lady showed tremendous potential to beat all the adults. 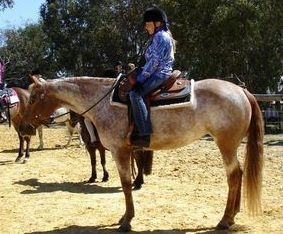