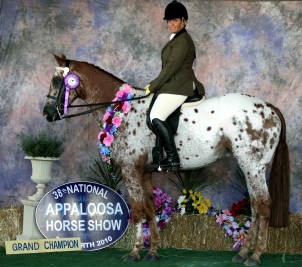 Congratulations to Sandy Landsford and the big moving gelding Cayuse Walk In Time.Not only did they win 2 of the dressage tests at the recent Appaloosa Nationals Tamworth, but also won the open hack and went on to win Grand Champion hack as well.They also placed well in the Led Hack,Suitability For Dressage and Hunter In Hand.Well done . 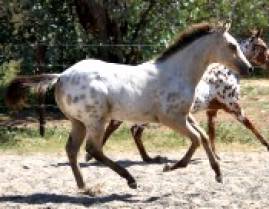 HANDSOME BOY OFF TO SUNNY QUEENSLAND!

Congratulations to Louise McFeeters from the Brisbane area for choosing this striking spotted buckskin weanling gelding.Cayuse Star Of Destiny has won the hearts of all that see him with his striking good looks and friendly,cuddly nature.Keep us posted on the progress of this special lad. 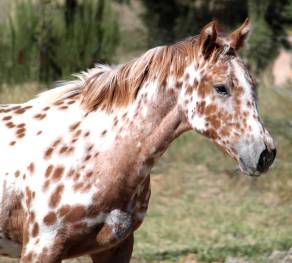 A FANCY FUTURE REINER FOR MEL!

Mel Torr has another flashy filly in her stables.This sparkling leopard filly Cayuse Heart Of Few (named because of her perfect heart shaped spot on her hindquarters)will hopefully live up to her top breeding to make a super reining mare for Mel in a few years.Ans I quess another lovely wife for their stallion Cayuse Bradford! 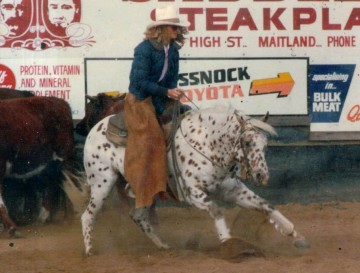 Saddly today the best Appaloosa cutting horse Australia has seen passed away peacefully at 33years young!This toughold horse was reknown for siring good looking horses with very quick atheletic ability that could turn their hoof to any working event with style and success.We have been priviledged to have had him here for the last years and xtra priviledged to have his most worthy replacement Cayuse Chatta Lena ,who everyone says is a clone of old Ric!!

Mel and Merv drove up on Australian day weekend and 'stole' two of my favourite fillies.I think their stunning Stallion Bradford will be thrilled when he sees them!Both were daughters of our old stallion Cayuse Fewsion,Prescribed By Few is a striking buckskin blanket and Lyrics By Few,a buckskin snowcap is a full sister to champion Red N'Reckless.They will be going to a great home. 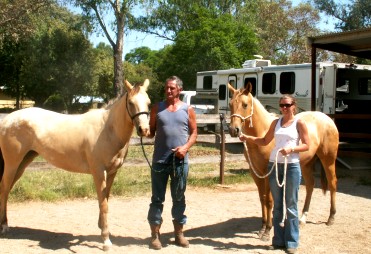 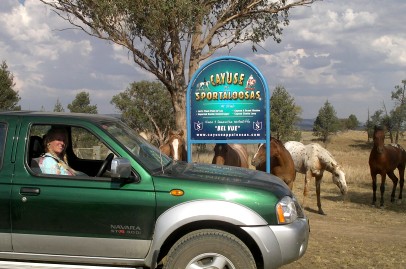 Well now hopefully no-one will get lost when coming to see their favourite breed,the talented Sportaloosas at Club Cayuse.Just turn in at our new road sign and we'll be happy to show you our world famous spotted horses!! 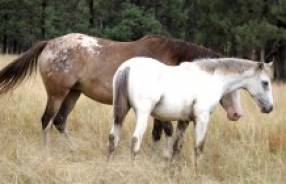 First foal born from frozen semen is a fewspot leopard filly!.Foaled on the 17th.October it was touch and go as mum had retained afterbirth and needed vet assistance,but all well now.Dancin Queen ,the filly is sired by Middlesom Xhoghun,also a fewspot stallion standing at the Blacklaw stud in Scotland.She is a buckskin or grulla dun with black points,very quiet and friendly and always on the go,hence her name.Interestingly the mother Cornish Storm is also out of a fewspot mare Cayuse Transfewsion (who is the dam of Cayuse A Grand Illusion).
Fingers crossed for our next Knabstrupper foal due 14 November.
The second foal born by frozen semen,(thanks to Dr Stuart Kellar of the Tamworth Equine Vet Centre for their hard work and dedication)arrived 18 November.Also touch and go as originally the mare Moonwalker had twins!!.A beautiful,strong bay leopard colt Edward X..
See the 2009 foal page for more pictures. 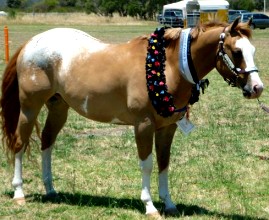 Congratulations to Karen White,Mollegen Training Stables Perth and her stunning gelding Cayuse Awesome Storm on winning the Supreme of Supreme at the W.A. Dilute Championships.Karen is a great fan and trainer of the spotted horse and great to see all her hard work pay off. 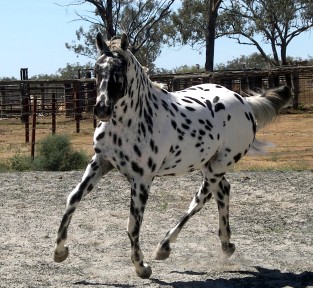 RARE BLACK LEOPARD KNABSTRUPPER COLT ARRIVES IN OZ!A spectacular black leopard purebred Knabstrupper colt has made the huge trip from Germany to Australia and has just been released from quarantine.

The Knabstrupper is a spotted Danish warmblood reknown for their extravagent movement and high jumping ability.They have a wonderful temperament and a natural willingness to please the rider plus they come in some sensational exterior colours.

Loris Flashpoint Af Lyn(affectionally known as Alf!) is a yearling sired by one of the best producing stallions in the breed Figaro Af Hallundbaek(see the sportaloosa website news for a picture of Flashpoints half brother Sheik).

His dam is a top studbook mare by the gold medal winner Conetti Lynghoj.Conetti's progeny are powerful movers and tremendous jumpers.Apollon who is one of the most famous sires is also close on the dams side.So this colt combines three of the very best bloodlines and we hope he will do as well in dressage and jumping plus siring some colourful foals.He was awarded 8,champion premium foal at the gradings. 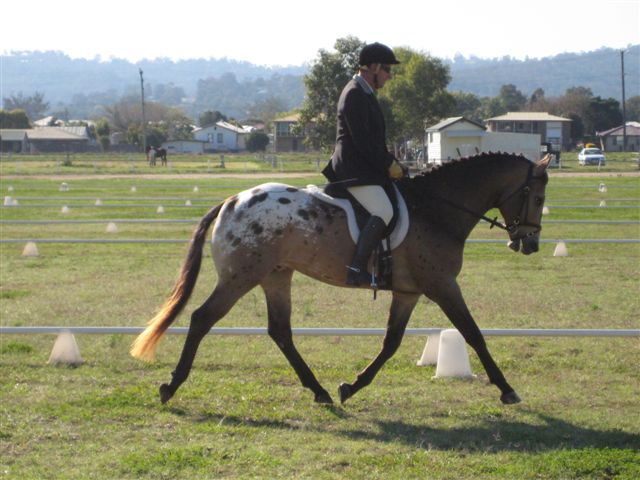 The stylish young stallion Cayuse Harry Hotspur expertly ridden by trainer and co-owner Ben O'Sullivan showed off his stunning paces to win his first dressage outing.The tall buckskin blanket stallion was bred by frozen semen from the Hannoverian State Stud at Celle Germany.
His sire is the winning black stallion Earl by Escudo 11.Harry's dam is the former National champion mare Cayuse Few Moon who has produced a string of wonderful foals.She is expecting a foal this year to the Hannoverian stallion Riverside. 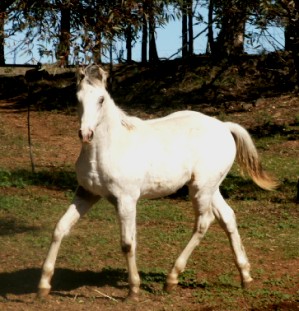 NEW SPORTALOOSA STUD FOR THE NORTH

Jesse Rowe of Cooper Downs, Banana near Rockhampton Qld.has just taken home the fabulous fewspot colt Cayuse Seahorse(my favourite) to start an exciting new breeding venture.Interestingly Jesse is the grandson of Fred Rowe who was one of the pioneer appaloosa breeders in central Qld.Some of his successful imported stallions were Lariwoods Decoration and Ice Blue Beam.Fred was also very active with the Droughtmaster cattle breed.So Jesse has the top bloodlines to produce some great spotted performance horses in the years to come.Also check out his beefy Droughtmaster bulls! 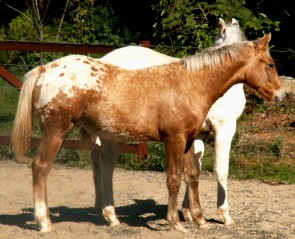 Sam Lindley ,Stanthorpe,Qld was after a good mare but when she spotted the flashy young Sportaloosa colt Cayuse Skip-O-Lena she fell in love and had to have him.The last Ric-O-Lena colt we've bred,he should look super in the campdraft arena.You might spot him in the showring too,strutting his stuff in the Dilute classes.Good Luck,he's lovely. 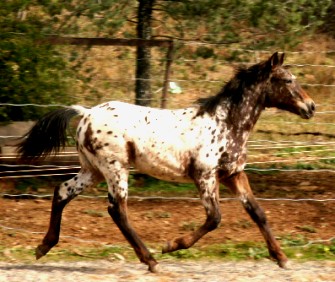 A special spotted warmblood chosen by Wayne Buckley.This flashy tri-coloured leopard colt combines some of the very top warmblood lines of Sandro Hit and Rubenstein(sired by Smash Hit) with the proven sportaloosa lines Cayuse Fewsion,Taco Taco and Red Eagles Peacock.He is a maternal half brother to our wonderful stallion Cayuse A Grand Illusion.so hopefully he lives up to his family name both under saddle and in the breeding barn! 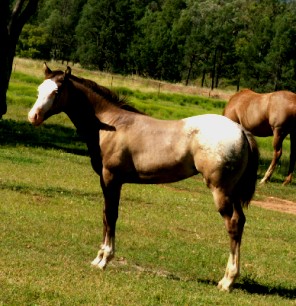 Janette Taylor,Lewiston SA.missed out on another grulla blanket mare I had once for sale so she was determined to buy this rare and beautiful Mighty Storm Song daughter.Cayuse Robin James will be with family as Janette also owns the spectacular Storm Song colt Total Outrage and his gelding brother.Hope to see them at some shows in the summer,all the best.
Robin James just won both the Sportaloosa and Appaloosa championships in the Warrunbungle online Foal show.Congratulations

MARE IN FOAL TO THE GREAT DIARADO!

Amanda McHugh from RockingM Stud,Mt.Isa,Qld caught me in a weak moment and bought this classy StudBook one Sportaloosa mare Cayuse Skip's Songbird by the fancy stallion Skip's Supreme(usa,exp.NZ).Songbird is in foal by frozen semen from Germany,to one of the world's hottest jumping sires,the jet black Holsteiner Diarado!.Amanda owns and promotes the special purebred Arabian Shahrak and the National champion Hez Juz Seekin T Be Cool,quarter horse.Songbird has foaled a stunning black colt,who could be available for sale. 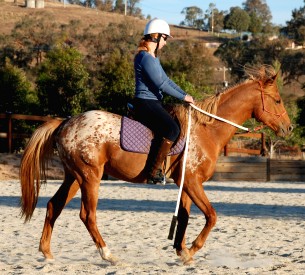 Marian Noonan has beaten me to break in the first progeny by our Sportaloosa stallion Cayuse A Grand Illusion.well done.She bred the colt knicknamed 'Nino'herself,and by all reports he is going very kindly under saddle.His dam is the part warmblood mare Frog Rock Shogun by PPP Fighting Irish.Marian bought Illusion's service in the Flood and Fire Stallion Auction so she is hoping for another good foal from her big moving mare.Being a keen sporthorse breeder she has bought the fewspot studbook one sportaloosa mare Cayuse Skip N'On Ice and will send her to a top warmblood stallion this season for another colourful dressage/jumping horse.Keep up the good work. 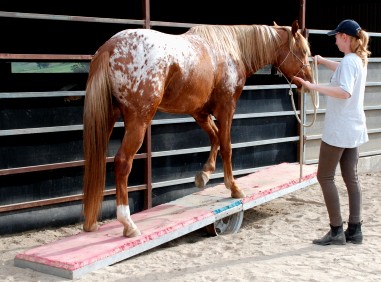 MARIAN AND NINO SHOWING OFF SOME TRICKS!

The striking red dun leopard son of Illusion has made his new home in Melbourne with keen dressage rider Louise Anderson.I'm sure they will have fun times together and make a great team to chanel his great movement into a dressage star of the future.